An Old Favorite: Bialosky and the Big Parade Mystery 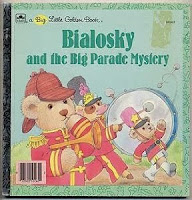 When my kids were little, their favorite 4th of July story was Bialosky and the Big Parade Mystery by Justine Korman.

Bialosky, the sweet and earnest little bear, has lost his trumpet--right before the 4th of July parade! He needs his trumpet to play in the parade, so he and his friends set out to find it. They tail a mysterious stranger who is traveling about town with an oddly marked briefcase. When the stranger stops in at a restaurant, Bialosky and his friends pretend to be waiters in order to gather more clues. Eventually, Bialosky finds the trumpet under his band hat, and the mysterious stranger is revealed to be a fireworks expert, in town for the annual Independence Day fireworks. The story ends with everyone enjoying the fireworks show and munching on delicious muffins. This is a great story to read when preparing preschoolers for a trip to watch the fireworks.
Posted by Ruth Donnelly at 9:39 AM 2 comments: