Ruby Red is an impossible-to-put-down YA novel written by German author Kerstin Gier, and translated by Anthea Bell. Sixteen-year-old Gwyneth has spent her life playing second fiddle to her beautiful cousin, Charlotte, who has been trained since early childhood for the special role she is expected to play. But suddenly it becomes clear that Charlotte isn't the special one, after all. Gwyneth is the Ruby, one of twelve people in the world with the gene that enables time travel--but, unlike Charlotte, she has had no instruction in how to deal with the time traveling episodes that strike without warning. This is the first in a trilogy; the second book is Sapphire Blue, and the third, Emerald Green, will be released in October 2013. If you liked The Time-Traveler's Wife, you'll love this one. 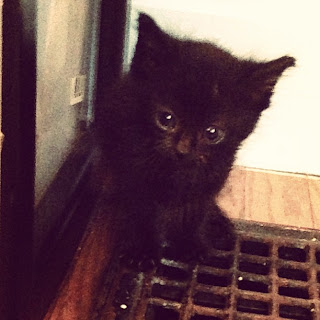 My daughter has been home from college less than 24 hours, and has already turned the household topsy-turvy. Her friend from the zoo rescued three abandoned kittens. We took the smallest, sweetest one. Not sure how Xander, the older cat, will feel about this.

Book Review: I Capture the Castle 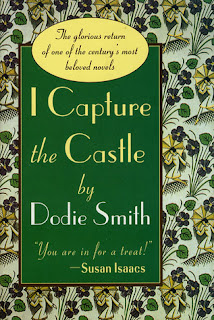 I just finished a delightful novel by Dodie Smith, the author of two of my childhood favorites: The 101 Dalmatians and The Starlight Barking.

Set in the 1930s, I Capture the Castle is the story of seventeen-year-old Cassandra Mortmain, who lives in a crumbling English castle with her quirky family. Cassandra is an aspiring writer. The story is told in the form of her journal in which she introduces us to her father, the eccentric author of a groundbreaking debut novel who now suffers from chronic writer's block, and her stepmother, Topaz, a renowned artist's model who loves communing with nature au naturel. Older sister, Rose, weary of poverty and isolation, longs to be a character in a Jane Austen novel. Younger brother Thomas (who is, like Cassandra, thought to be "tolerably bright"), Stephen, the son of the Mortmains' late housekeeper, who plagiarizes poetry in an effort to win Cassandra's love, and a dog and a cat known as Heloise and Abelard, round out the family.

The lively shenanigans of the Mortmain sisters keep the story bouncing along. Cassandra gets caught in the bath by the newly arrived Americans, after having dyed herself green. Rose wears a fur coat and poses as a bear in an unsuccessful attempt to avoid embarrassment. Cassandra goes to Belmotte Tower on Midsummer's Eve to conduct an arcane ritual of her own devising, and later masterminds a diabolical plan in hopes of forcing Father to resume writing. But as the story progresses, one thing becomes undeniable: Cassandra is falling in love with her sister's husband-to-be.

Here's a conversation in which Simon offers his opinion on who the Mortmain girls would be if they were paintings:

"Rose is a Romney," said Simon. "She's quite a bit like Lady Hamilton.... And Cassandra's a Reynolds, of course--the little girl with the mousetrap."

"I'm not!" I said indignantly. "I hate that picture. The mouse is terrified , the cat's hungry and the girl's a cruel little beast. I refuse to be her."

"Ah, but you'd let the mouse out of the trap and find a nice dead sardine for the cat," said Simon. I began to like him a little better.


And here are some of Cassandra's musings:

I am writing this in the attic .... I don't intend to let myself become the kind of author who can only work in seclusion--after all, Jane Austen wrote in the sitting-room and merely covered up her work when a visitor called (though I bet she thought a thing or two)--but I am not quite Jane Austen yet, and there are limits to what I can stand.

I set a lot of store by may--I once spent hours trying to describe a single blossom of it, but I only managed "Frank-eyed floweret, kitten-whiskered," which sticks in your throat like fish-bones.

I could easily go on writing all night but I can't really see and it's extravagant on paper, so I shall merely think. Contemplation seems to be about the only luxury that costs nothing.

I Capture the Castle isn't a children's book, but it reminds me of my favorite sort of middle grade novel. It's exuberant, character-driven, and brimming with voice.

A film adaptation came out in 2003. I haven't seen it yet, but it's on my list of movies to watch.

For another opinion, check out this fantastic review by The Dreamstress.