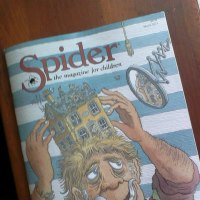 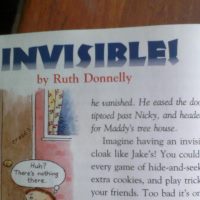 It's exciting to see my science article, "Invisible!" and science superpower activity, "Freaky Force Field"  in this month's issue of Spider Magazine! If you're interested in writing nonfiction for children, here are some tips I learned along the way.

1. CHALLENGE YOURSELF TO TRY SOMETHING NEW.
As a dyed-in-the-wool fiction lover, I never thought I'd write an article for seven- to nine-year-olds about the rapidly advancing technology of cloaking devices and metamaterials. The whole thing started when I saw a contest in Children's Writer. The challenge: to write an article for elementary school-aged kids about a science topic. I decided to push myself out of my comfort zone and try it.

2. THE INTERNET IS YOUR FRIEND.
My first step was to google current science topics. I developed a list, narrowed it, and finally selected one that seemed likely to fire up the imaginations of young science fans: invisibility!

3. DO YOUR RESEARCH AND CITE YOUR SOURCES.
I did more online searches, and launched into a study of the subject, focusing especially on current developments. I made sure to record my sources. High-quality kid lit magazines like the Carus publications (Cricket, Spider, Ladybug, etc.) and Highlights demand meticulous research, and I knew that was something the contest judges would be looking for.

4. THINK OF AN INTRIGUING HOOK.
The actual writing was fun. I opened with the idea of an "invisibility cloak" to gain readers' interest. Any kid who has read or watched Harry Potter has surely dreamed of having one!

5. KIDS ARE SMART.
I avoid oversimplifying or talking down to my readers. Kids are capable of understanding complex ideas. Still, it's not easy to translate science vocabulary into language youngsters can relate to. One strategy I found helpful was to compare new concepts to familiar ideas. For example, when explaining how metamaterials bend light, I related it to the optical illusion you see when you look at a straw in a clear glass of water.

6. ASK FOR HELP FROM EXPERTS.
My science-minded family members were helpful  in understanding the research. During later revisions, I turned to a critique partner who works in the field of engineering to make sure my interpretations were accurate.

7. IF AT FIRST YOU DON'T SUCCEED, TRY AGAIN!
I didn't win the contest. But one of the judges wrote an article in which she mentioned a few of the topics that made it to the short list--and mine was on it. That gave me confidence to show the article to Margaret Mincks, the editor of Spider, when she came to Saint Louis for the Missouri Writers  Guild conference. Margaret liked the idea, and a few months later she replied with an invitation to revise and resubmit. I did the requested revisions, and was happy to receive an acceptance!

8. ATTEND WRITERS' CONFERENCES AND NETWORK.
Face-to-face contact with an editor can lead to additional sales. When I pitched my idea to Margaret, we discussed the possibility of a sidebar featuring a related activity. So I went home and wrote up a couple of "science superpower" activities, and Spider bought them, too. One is in the print mag and one is on their website. Neither has anything to do with invisibility, but they'll give kids something to do while waiting for invisibility cloaks to appear on the shelves of Toys-R-Us!

Go to SpiderMagKids.com to try one of my science superpower activities.

9. BE WILLING TO KEEP REVISING.
Once "Invisible!" was accepted, I expected smooth sailing. But there was a glitch: When you're writing about cutting-edge science, the technology refuses to stand still! Every few months, there would be claims of a major advance in the field of invisibility. Each time we would carefully consider whether the article needed to be revised to reflect the new information. Sometimes it did, but sometimes the new breakthrough turned out to be just a slight variation on something already covered.

10. IT TAKES A VILLAGE!
It's not just about the words on the page. The skills and expertise of many people are needed to create an accurate and appealing story that kids will want to read. Margaret Mincks was fantastic to work with throughout the project. She and the Spider staff did a wonderful job of fact-checking. Margaret contacted Dr. Nathan Cohen, who recently made science news when he patented a cloaking device, and he granted permission to use some excellent photos, including one of a young man named Peter crouching inside the cloaking device, thus becoming the world's first actual "invisible man"--at least, to microwaves! (Side note: Dr. Cohen believes that a cloak that works on visible light will be developed within a few years.)

I'm absolutely delighted with the illustrations! Mark A. Hicks' charming cartoon illustrations clarify the concepts in "Invisible!" and bring the story to life. And Benton Mahan's exuberant animal characters pull you in, making you eager to create a freaky force field of your own.

11. CHANGE IS IN THE AIR.
The face of children's publishing is shifting. The new Common Core State Standards place greater emphasis on nonfiction, so editors will be buying and publishing more of it. If you have an interesting nonfiction idea buzzing around in your brain, there's no better time to give it a try!