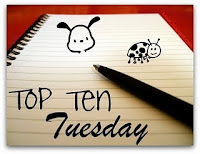 I began thinking about my favorite literary characters after reading the latest newsletter from DIYMFA. It was such a fun topic, I decided to expand my thoughts into a blog post, and (hoping to avoid a ridiculously long post) I focused on female characters. My musings dovetailed nicely with the official Top Ten Tuesday theme of the week at The Broke and the Bookish, which is Top Ten Characters I’d Like To Switch Places With For 24 Hours.

This week it's a hodge-podge--not just middle grade, though it does skew in that direction. And, after a weekend of nonstop fun (including Saturday's visit to the Saint Louis Zoo's new Sea Lion Sound exhibit and Sunday's hike around the Cache River Wetlands/Heron Pond cypress swamp in southern Illinois, currently drought-depleted, but still beautiful) I can't even begin to wrap my brain around the switching-places part. Nor could I limit myself to ten, or even fifteen. It sounds so nice and alliterative in the title ... but, alas, it's a lie.

Here, in no particular order, are my 15 16 FAVORITE FEMALE CHARACTERS IN FICTION:

Charmain Baker
House of Many Ways by Diana Wynne Jones)

Scout Finch
To Kill a Mockingbird by Harper Lee

Elphaba
Wicked: The Life and Times of the Wicked Witch of the West by Gregory Maguire

Meg Murry
A Wrinkle in Time by Madeleine L'Engle

Randy Melendy
The Saturdays, Four-Story Mistake, and Then There Were Five
by Elizabeth Enright


Barbara Kingsolver deserves special mention, because I love so many of her characters. If I were forced to choose an all-time favorite author, it would probably be Kingsolver,who is simply brilliant at creating memorable and nuanced characters, both male and female.

Who are your favorite fictional characters?

Posted by Ruth Donnelly at 1:00 AM

Lenna @ She is Reading said...

I'm pretty sure Hermoine resonates with every woman out there. We all want to be smart and strong and independent. And I must say Elizabeth Bennett didn't even cross my radar. Her life seemed so boring with all the needlepoint and sitting. You have to make sure you got the right day for switching!

Great picks! I love Scout, Jane Eyre, and Hermione as well. I also really liked Sophie in Hex Hall and Nora in the Hush, Hush series.

Great post! I love that you included Frankie Landau Banks since she's such a wonderfully flawed character. :)

Thanks for linking to DIY MFA! Write on!

Many of our characters overlap. But I have a couple of redheads that would always be on my list: Pippi Longstocking and Anne (with an E) Shirley. Then just to show that I am not hair-color-biased I would add that Grandma Dowdel from A Long Way from Chicago and The Year Down Yonder. So marvelous is she that Richard Peck brought her back in A Season of Gifts.

You've got several books on this list I haven't read. Oh no! I already have a "to read" list that is probably pushing 60-70 books easy! :-)

Great list! I love Elphaba though I wouldn't want to trade places with her for very long. She had such a hard life.

But, Lenna, wearing those dresses, riding around in carriages, hanging out with Mr Darcy... and it's just for 24 hours!

Gabriela - Thanks for stopping by, AND for the idea.

Mirka - I WISH I had thought of Pippi Longstocking! And glad to know you're not totally choosing on the basis of hair color. ;)

Denise, thanks for stopping by. Elphaba is such a great character. Maybe not to trade places with permanently, but truly, there's no one like her!

What a great list! I also have Elphaba on mine...I just think it'd be so interesting to see her life for 24 hours. Not for longer, though! ;)

Thanks so much for visiting me at LiteraryObsession.com, I adore comments! :)

Hermione didn't make my list but she's certainly the one from that series that I would choose :)
Elphaba is a favorite character for me but I've only seen the musical and haven't read the book. It's on my shelf...just haven't gotten to it yet :(

Great list. I'm very fond of Scout and Meg. I'll add Amanda Pig to the list and Mama Pig because I've learned so much about being a good mother from reading those books :) By the way, my daughter absolutely loved the movie BRAVE. I think it's the first Pixar movie with a female lead.

You hit some on your list that I forgot about. Scout and Meg Murray especially. Thanks for the comments on my blog!

This is a fun post and I like your mentions. To Kill a Mockingbird and Matilda -- great choices! I just finished "Ida B" earlier today and that was a beautiful voice/character.
Lists are so complicated -- so many to choose :)

Others I can think of off the top of my head:

- Dear Dumb Diary books...these are scholastic, but man they are a laugh and the MC is just so cool :)

- The MC in the "Magic In Manhattan" series (series of 4 YA books by Sarah Mlynowski...they are fun!).

- MC in "Inside Out and Back Again"

Too many...honestly I haven't even really reached back because there are so many other classics, as well as new!

I will suggest another fantastic series (with a great MC and story) to you though. "The Grim Hill" series by Linda DeMeulemneester. I LOVED this series...honestly I just loved them. I think you might like them too.

Jill (A.)....haven't "introduced" myself, but enjoy your blog ....writer/reader here too ...at least attempting to write...and definitely reading :)

An interesting list with some well-rounded characters! I haven't read quite a few of these but should.

So many great characters! Thanks for visiting my TTT!

What a great list! I found myself agreeing with all, and then I realized I've never read Elizabeth Enright. (And now I will.) Also, I'm so glad we have Frankie Landau-Banks around now.

Yes, Amanda Pig! I loved reading Oliver and Amanda with my kids, and Mother Pig is the best. :) I'm glad your daughter liked Brave. What a great mother-daughter film!

Thanks for commenting, Meg!

Thanks for stopping by, Ree. Glad we agree on Elphaba!

Peppermint, I love the musical too, but when I got to the end of the novel I couldn't bear to stop reading. I had to get my hands on the sequel, Son of a Witch, immediately! Can't think of too many books I've felt that way about.

Jill, thanks for the fantastic reading suggesions! I'm glad you stopped by!

Linda, hope you love Elizabeth Enright as much as I do! She's well-known for Gone-Away Lake and Return to Gone-Away Lake, but the ones I loved as a kid were the Melendy books, beginning with The Saturdays, about 4 bright, quirky siblings who have adventures in 1940s NYC.

Great thoughts as always, Marcia! How did I forget about the Penderwicks? I don't know Grandma Dowdel, I had to google her. Richard Peck, eh?

Great post. I haven't read all of the books but those I have, I agree they're great female characters. Frankie would rule the world :)

Thanks, adinabb. Glad we agree about Frankie!

Lots of books on your list that I haven't read. Adding to my list now. I'm especially swayed by your comments about Barbara Kingsolver. I think I'll move Prodigal Summer to the top. Thanks!

Ruth, I hope you love it as much as I did!

Love your list. Here's another: Opal from Because of Winn Dixie. What a unique and memorable character.

Oh, yes, I love Opal! Thanks for the comment, Randi.

I love Jane Eyre and Hermione- both amazing females. So fun to look at your list! I was reminded of some favorite reads. :)

I don't read much children's lit anymore, but I would put Hermione and Luna Lovegood on my list, along with Nancy Drew, of course. My adult lit favorites include Emma Harte (A Woman of Substance), Meggie Cleary (The Thornbirds), Lucy Snowe (Villette by Charlotte Bronte) and Jane Austen's Eleanor Dashwood (Sense and Sensibility) and Anne Elliott (Persuasion).

Eileen, those are great suggestions! I just downloaded Villette. Now to find time to read it...

Ooh, I'm going to second Hermione Granger. She's an inspiration to any girl, I think. By the way, I love the name of your blog!