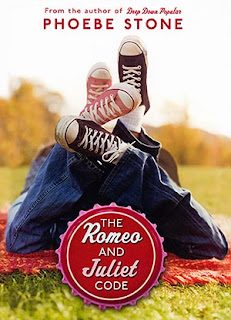 The latest of my pre-Newbery reads is The Romeo and Juliet Code by Phoebe Stone.
When London is devastated by German bomb attacks during World War II, eleven-year-old Felicity is sent to stay in Maine with her father’s family, whom she has never met. The family includes Felicity’s grandmother (known as “The Gram”), Uncle Gideon, who will also be her sixth grade teacher, and Aunt Miami, whose habit of quoting Shakespeare is reflected in the book’s title.
Felicity (nicknamed Flissy) has many unanswered questions. Why are Uncle Gideon and Gram angry with her parents? Who is hidden in an upstairs room? What are Flissy’s parents doing in Europe, and how long will they be gone? Why does Gideon refuse to let her see their letters? Why is the piano nailed shut?
Gradually, the answers to some of the questions are revealed, partly through the investigative actions of Flissy and her cousin, Derek, and partly through the passage of time. Flissy continues to miss her parents, Danny and Winnie, but she gradually adjusts to her culture shock, grows to love her American relatives, and becomes less prickly about clinging to her British heritage.
I liked the well-researched historical aspects of this novel, and I found Flissy’s eccentric  relatives appealing. My interest level took a sharp upturn when Flissy’s cousin entered the picture. I also enjoyed the subplot in which Flissy and Derek find a Romeo for Aunt Miami’s Juliet, though the solution was predictable. I don’t want to give too many spoilers, because the family secrets were a large part of what kept me reading. The revelation of the final secret was quite moving, even if I did see it coming.
I was delighted by the allusions to the books of Frances Hodgson Burnett (A Little Princess and The Secret Garden). Flissy likes Burnett's books so much she vows to become an authority on them, and parallels can be drawn between some of the characters.
Although I enjoyed this novel very much, I found Flissy’s first person narration irritating at times, especially during the first part, when she has no one her own age to interact with. Perhaps some of the story could have been more effectively conveyed in the third person. As narrator, when Flissy does something immature or embarrassing, she has to explain what she’s doing while simultaneously refusing to admit it, and that’s tough to pull off. To me, Flissy’s voice often sounds like that of an annoyingly “precious” younger child. Though her immaturity is acknowledged by her relatives, her self-awareness juxtaposed with her babyish behavior seems odd, and her repeated insistence that she is  a “proper British child” does not always ring true.
A note about the cover art: The picture is misleading and historically inaccurate. Flissy and Derek wouldn’t have worn jeans in 1941. And, though Converse has been around for a long time, they only made hightops in the early 40s--and I’m pretty sure All-Stars didn’t come in pink until after Chuck Taylor’s death in the late 60s. Besides, though Flissy does have a bit of a crush on her cousin, it’s not at all the kind of book the cover implies. Of course, this isn’t the author’s fault, and it doesn’t detract from the quality of the story, but readers who choose it on that basis may have to readjust their expectations.
The Romeo and Juliet Code is a quiet story set against the backdrop of larger world events, and I found it a very interesting read. For those  who enjoy historical fiction set in World War II, stories of quirky families with deep, dark secrets, and liberal use of Briticisms, it will be ever so intriguing.

So many wonderful stories... I'll look this one up.

The cover does look a bit misleading for a story set in the 40's. (It kind of bugs me as a reader...often I am expecting one thing and end up with another...and not the the "other" isn't just as good, it just takes my mind a while to adjust my expectation.)

This sounds interesting and I'm glad you mentioned the cover because when I read your review I thought it didn't quite mesh with the cover.

Haven't read this one yet, but already have it on the TBR list through Barbara Watson, another MMGMer. I like quiet stories.

I'm currently reading this book, I'm 13, so this book seemed like it would be a fun romance book but, on chapter 5, I'm not feeling any romance. I googled this book to see why the cover didn't exactly match the book and what exactly the book was about and this review is quite descriptive without spoiling it... Excellent work.

Thanks, Anonymous, I'm glad you stumbled upon my review!