I love it when stories include specific details that give insight into the character or the world. Finding just-right details is a great way to make sure you’re showing, and not just telling.

In commercial fiction, it might mean using a brand name, though it doesn’t have to.

In Spells and Sleeping Bags by Sarah Mlynowski, Rachel doesn’t just state, “I’m not mean to my sister.” She says, “I don’t pull my sister’s hair or rip off her Barbies’ heads.”

Great specific details--and then the character spins off on a tangent about how she doesn’t actually have Barbies any more … okay, fine, she does, but she doesn’t play with them any more. Much.

Awesome characterization! Now we know Rachel is a young teen, and that she still has a sentimental attachment to the Barbies she’s (almost) outgrown … don’t we all?

In Maggie Bean Stays Afloat by Tricia Rayburn, it’s not just “She was trying to decide what kind of gum to get.”

It’s also “Bubbilicious and Bubble Yum had tons of sugar, while Trident and Carefree had none, and were therefore the better, healthier option, but that didn’t make the decision much easier.” From this, I know that Maggie lives in my world … and that she knows what’s healthy, but sometimes has other priorities. Again, I can relate!

Philippa Fisher’s Fairy Godsister by Liz Kessler could have simply stated, in a telling sort of way, “I don’t like helping my parents with their party planning business any more.”

Instead, Kessler shows us: “It used to be fun, I suppose--when I … actually liked being driven around in a bright yellow VW van with pictures of clowns and jesters and rabbits on the side; when I didn’t know that there was any such thing as a problem that couldn’t be sorted out with tickle therapy.”

This not only gives us a good visual image of the goofy-looking van, it deepens our understanding of Philippa and her parents.

It’s “Skye was blowing out her cheeks and imitating a fish, which meant she was even more bored than Rosalind had feared.”

And in my childhood favorite, The Witch Family by Eleanor Estes, we aren't just told that Old Witch "does a lot of magic.” Instead, she's “chanting runes, doing abracadabras, casting spells and hurly-burlies …”

Hurly-burlies! That sends a shiver down my spine.

When I flip through a book and rich, interesting details jump out at me, I know the book is likely to be worth the read.

If you have a favorite author who makes good use of specific detail, please share in the comments.
Posted by Ruth Donnelly at 11:30 PM 8 comments:

You're standing in the bookstore. You pull a book off the shelf, flip it open, and scan the first page ... then you tuck it under your arm and head for the checkout line.

Or you're sitting at your computer. You click "See Inside" on Amazon and scroll down to the opening paragraph ... and, the next thing you know, you're adding the item to your cart.

What makes some middle grade books instantly captivating? There's no formula for magic, but an orienting first sentence can help.


I like some grounding before plunging into action or dialogue. I'm not talking about pages and pages of explanation or description--but I don't want to be in the middle of a battle scene before I know who I'm rooting for, or in the middle of a conversation with no idea who is talking. A little grounding works wonders.


The orienting sentence can be detailed and specific:
Once upon a time, sixty years ago, a little girl lived in the Big Woods of Wisconsin, in a little gray house made of logs. (Wilder; Little House in the Big Woods)


Or it can be prosaic:

It can be funny and intriguing:
I’m pretty sure my camp knapsack is not supposed to be levitating off the sidewalk of Fifth Avenue. (Mlynowski, Spells and Sleeping Bags)
Sunday morning began with the awful realization that I’d made the biggest mistake of my life. (Kessler; Philippa Fisher's Fairy Godsister)

A sentence of dialogue followed by an orienting sentence can work, too:
“That slowpoke Sarah!” Henny cried. “She’s making us late!"
Mama’s girls were going to the library, and Henny was impatient. (Taylor; All-of-a-Kind Family)
If you've read a middle grade novel (old or new) with an opening that grabbed you and wouldn't let go, please share it in the comments!


Related posts:
Middle Grade Titles
The Top 100 Books for Kids
Why Middle Grade and Middle School Are Not the Same
Great Picture Book Ingredients
Posted by Ruth Donnelly at 10:03 AM 7 comments:

Bewitching October Reads: Only A Witch Can Fly 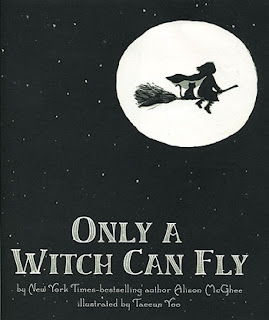 Fall is here! The weather has turned cool, the leaves are changing color, the Cardinals are in the World Series (yay!) and I'm in the mood for Halloween stories.

Only A Witch Can Fly by Alison McGhee is the charming tale of a "young witch who had not yet flown". The linoleum block print illustrations by Taeeun Yoo have a lovely, retro feel. They are wonderfully evocative, summoning up memories of old houses and chilly autumn nights.

The pictures and the story work together, each contributing to the overall effect. The pictures are beautiful, but a few of them don't mesh with the words. When the text says, "would you too begin to cry..." I expected to see the little girl crying, but instead she looked startled. Similarly, "cat arches his back and croons ...." made me wonder why the cat in the picture wasn't arching his back. A small child might need a picture clue to know what that means.

The book is written as a sestina, a form of poetry that originated with the French troubadours in the 12th century. The unusual rhythm took a little getting used to, but once I had reread it a few times, it got inside my head, and I enjoyed the internal rhymes, near-rhymes, and repetition. This is the kind of book you could read more than once to a child with good receptive language skills. A fidgety, ADHD-type kid might not have the patience to sit still for it. It's probably not a book most children would read alone, as the sentence structure is rather complex.

Another unusual thing about Only A Witch Can Fly is that the whole story is told in the second person subjunctive: If you were a young witch...

When the young witch flies at last, it is oddly moving: "And you? You have flown ... you have flown!"

I really enjoyed this picture book. The author, Alison McGhee, is a New York Times-bestselling author. Her novel Shadow Baby is on my to-be-read list.

Note: I found out about this book through the wonderful writers in the PB Book Club at AbsoluteWrite.
Posted by Ruth Donnelly at 7:32 PM 2 comments: