Whether you’re lying by the pool or sitting in your favorite air-conditioned coffee shop, summer is the time to lose yourself in a great middle grade novel. Here are some I enjoyed:

Any Which Wall by Laurel Snyder

This is a book with a timeless feel in the tradition of E. Nesbit, Edward Eager, and C. S. Lewis. It made me feel like a third grader, discovering Half Magic for the first time--and, indeed, the author views the book as an homage to Eager. One hot summer in Iowa, four kids find a magic wall in a cornfield, and are transported to other times and places! The reader will be transported, too.

The Visconti House by Elsbeth Edgar

A story of a lonely girl who loves to write and draw, a boy with a secret, and a mysterious old house. Laura feels isolated from the other kids at school. Her self-consciousness about her unconventional family and her own nonconformity makes her reluctant to openly befriend Leon, even though she knows he need a friend. As Laura and Leon slowly overcome their mutual defensiveness, they work together to unravel the history of the Visconti House. This is a sweet and innocent realistic middle grade with just a hint of romance. Laura is a very young fourteen--her reactions would be more believable if she were ten or eleven--and at times you may want to yell at her to stop being so spineless. Still, the story is surprisingly moving and well worth reading.

Emmy and the Home for Troubled Girls by Lynne Jonell

I’m already a fan of Lynne Jonell, having enjoyed Emmy and the Incredible Shrinking Rat and The Secret of Zoom, so I knew I was in for a fun read with Emmy and the Home for Troubled Girls. (Is that a great title, or what?) Emmy and her rodent friends are back for another adventure, matching wits with Emmy’s former nanny, Miss Barmy, who is still atrociously evil, even though she’s now a rat.
Links to other reviews:
Too Cool Books
We Be Reading 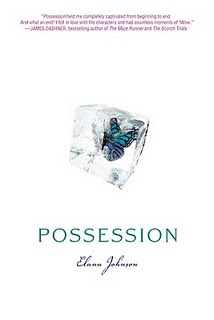 I've been a follower of Elana Johnson's marvelous blog for some time now. That's why I was so delighted to receive an ARC of her YA novel, Possession, which will be released in June 2011 by Simon Pulse.

I write for middle grade and younger, but I'm a big fan of YA, especially when it has compelling characters, an intriguing setting, and a conflict that makes me care. Possession has all three, and I found it hard to put down. I should also mention that I'm very picky about dystopian fiction; a lot of it leaves me cold. In spite of my unreasonable bias, Possession was captivating--it swept me right into the story.

Here's the back copy:

Vi knows the Rule: Girls don't walk with boys, and they never even think about kissing them. But no one makes Vi want to break the Rules more than Zenn...and since the Thinkers have chosen him as Vi's future match, how much trouble can one kiss cause? The Thinkers may have brainwashed the rest of the population, but Vi is determined to think for herself.
But the Thinkers are unusually persuasive, and they're set on convincing Vi to become one of them...starting by brainwashing Zenn. Vi can't leave Zenn in the Thinkers' hands, but she's wary of joining the rebellion, especially since that means teaming up with Jag. Jag is egotistical, charismatic, and dangerous--everything Zenn's not. Vi can't quite trust Jag and can't quite resist him, but she also can't give up on Zenn.
This is a game of control or be controlled. And Vi has no choice but to play.

I enjoyed the voice of Vi, the smart, sarcastic, fiercely independent narrator. Her love triangle is intriguing--she's torn between her longtime boyfriend, Zenn, and an attractive bad boy, Jag, but gradually discovers neither of them is exactly what she thought. Vi is believable as a wounded heroine, traumatized by the disappearance of her father and her sister. She also struggles with her disability--or is it a gift?--that involves sensitivity to "tech",  the energy force that powers the society's technology. Johnson brings all these elements together in a fast-paced, exciting, and thought-provoking story.  There were a few spots that were confusing for me--I had to do some rereading--and, in some places I would have liked a little more explanation. I won't spoil the ending, except to say it will surprise you. Although it wasn't the ending I hoped for, I loved that she went for the unexpected outcome. I'm looking forward to a sequel!
Posted by Ruth Donnelly at 11:38 AM 6 comments:

My students are at the beginning stages of learning to write. But as they were working on a project for Mother's Day, I noticed once again that it's the specific details that make writing come to life.

The kids were completing sentences about their mothers. One began:

Something to think about when revising--it's the details that add sparkle.