It's almost here! The start of NaNoWriMo 2010 is just around the corner. At midnight on Oct 31, aspiring novelists everywhere will begin tapping away at their keyboards, striving to reach 50,000 words by November 30.

This year will be my fourth year to participate in NaNoWriMo, and it's always a great experience. Aside from the satisfaction of setting and reaching a major writing goal, NaNo offers the opportunity to connect with other writers, both online and in person. It also provides the perfect rationale for letting other things slide and making writing the number one priority--after all, it's only for a month!

The idea behind NaNo is explained by founder Chris Baty in his book, No Plot? No Problem! He encourages participants to turn off their inner editor and get the words down. It doesn't matter if you haven't got everything figured out; if you don't know what should happen next; if you don't feel particularly inspired--just keep writing. Get the words down, even if they're not perfect--whatever's wrong can be fixed in revision. The point is not to turn out a finished, perfect, ready-for-publication novel in 30 days--that isn't realistic. The point is to create a first draft of your novel, or a significant chunk of it. (Middle grade authors are lucky-- 50,000 words is the perfect length for a first draft of a novel for younger readers.)

If you've always wanted to write a novel, there's still time to sign up for NaNoWriMo. It's free, and it will give you access to a huge support group, many resources, active online forums, and local events, including write-ins.

Whether you're a new or a returning NaNoer, you might be interested in the NaNoWriMo Warriors facebook group. Just send the moderator a request to join, and you'll be added to the group.
Posted by Ruth Donnelly at 8:44 PM 8 comments:

Heather Brewer and her husband were in front of us in Starbucks before her author talk at The Big Read.

"That's Heather Brewer!" I said as we waited for our lattes. "She writes the Vladimir Tod vampire series."

"Oh," said my husband. "Is that why she is dressed like a demented train conductor?"

My husband is not always the best judge of fashion. I thought she looked cute and hip in a goth sort of way. She had a purple streak in her hair, and she was wearing a backpack shaped like a stuffed bat. Very appropriate attire, given her subject matter and target audience.

I missed the first part of Brewer's presentation because I was participating in Pitch-a-Palooza. When that was over, I hurried over to catch the end. She's a compelling speaker (I had the opportunity to hear her speak once before), and it was clear that the audience was hanging on her every word. She spoke movingly of being bullied as a child and of having teachers turn a blind eye to it--an experience that has shaped her writing for young people. She is very outspoken on the subject of bullying. It is never okay, she said. It does not "build character". It is just very, very wrong.

Brewer shared an anecdote about how she chose her subject and genre. She had heard the advice to "write what you know", so she made a list of things she knew. She thought it would be a long list. But, she said, it turned out she only knew three things! First, she knew how it felt to be bullied. Second, she knew about teenagers--she feels she is a teenager at heart, and teens are often drawn to her. And, third, she knew about vampires, having been a long-time fan of Dracula and other vampire novels. BULLIED ... TEENAGE ... VAMPIRE. From this, Vladimir Todd was born. As soon as she envisioned him and knew his name, Brewer said, she instantly knew his whole story. Not just the first part--Eighth Grade Bites--but his whole story. She views the five books in the series as one story split into five parts.

Brewer took questions from the audience. An earnest young writer--probably eleven or twelve years old--was sitting next to me. He raised his hand and asked for writing advice. Brewer encouraged him to write, write, write. Butt in chair = writing. She assured all the aspiring young (and, uh ... older ...) writers in the audience that they CAN do whatever they want to do.

The boy raised his hand again. What should he do, he wanted to know, about the new ideas that keep occurring to him all the time? Brewer seemed to relate to that. She advised the boy to keep an idea notebook. She then acted out what happens when a new idea comes to her. "Heather!" the idea whispers. "Write me. Write me. I'm a really GOOD idea!"

"No, idea!" she yells. "You're going in the notebook. You have to wait until I finish this novel."

Heather Brewer then set about signing books for her adoring fans. Oh, and she gave us all "Vlad Bags"! Mine is pictured below. 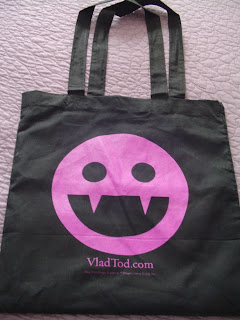 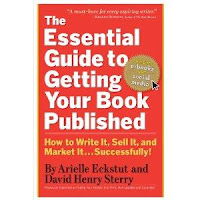 The Pitch-a-Palooza at the Big Read festival was an opportunity for authors to pitch their novels and receive feedback from David Sterry and Arielle Eckstut, authors of The Essential Guide to Getting Your Book Published. The person with the best pitch won a consultation with a leading literary agent.

I had looked at the Big Read website, but I hadn't seen anything about this event. But, as it turned out, I was able to get a spot even though I hadn't signed up in advance.

There were about forty participants in all. We were each assigned a number. When it was our turn, we had to step up to a podium on the stage and gave a one-minute pitch. I pitched a children's chapter book. The facilitators said it was a strong pitch, which was great to hear--but cautioned me not to "bury the lead" ... in other words, get to the interesting part more quickly. They emphasized the vast quantity of material an agent has to read just for his/her current clients, not even counting queries. In light of that, they said, it's essential to get to the point right away.
It was fun hearing the other authors' pitches, and everyone seemed to find the feedback helpful. Being able to hear the advice given to others was very valuable.There was a wide variety of genres represented, and many of the pitches were quite polished. The audience was friendly and encouraging--we were all in the same boat, after all--and each pitch was followed by cheers and applause. By the end of the session there was a strong feeling of camaraderie as we chatted about our works in progress and wished each other luck in finding an agent.

I bought a copy of The Essential Guide to Getting Your Book Published--it looks like it will be a good resource.
Posted by Ruth Donnelly at 7:38 PM 2 comments:

More from the Big Read...

Caroline Todd and her son, Charles Todd, are the coauthors of numerous mysteries, including the Ian Rutledge series about a Scotland Yard detective set in circa–World War I England. They work together on each book, striving to make the storytelling seamless despite having two authors.

Posted by Ruth Donnelly at 10:02 PM No comments: 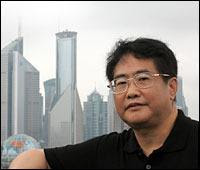 Qiu Xiaolong was is a novelist and poet who was born in Shanghai, but currently lives in St. Louis, Missouri. Qiu is the author of the popular and award-winning Inspector Chen series, including The Mao Case, Red Mandarin Dress, and A Case of Two Cities (which is set in both St. Louis and Shanghai). He has a Ph.D. in comparative literature from Washington University. His books have been published in twenty languages, and have sold over a million copies.

Part 4 will be about Caroline Todd's part of the panel discussion.
Posted by Ruth Donnelly at 9:47 PM 2 comments:

At The Big Read in Clayton, MO on October 9, authors shared their inspirations, insights, and information about their writing process...

Claire Applewhite is the author of Crazy for You, a romantic suspense novel, and The Wrong Side of Memphis, a murder mystery. Her next novel, St. Louis Hustle, will be released later this year. Applewhite is a contributing editor to the St. Louis Post-Dispatch. She is active in local and national writers' groups, including Press Club of Metropolitan St. Louis, St. Louis Writers Guild, Sisters in Crime, Heartland Writers Guild and Mystery Writers of America, and is the president of the Missouri Writers Guild.

A funny anecdote--while the authors were speaking, a large dog ran through the tent with a man in hot pursuit. Apparently it got away from Dawn Sylvie-Stasiewicz, the Obamas' dog trainer and author of
The Love That Dog Training Program, who was presenting nearby.

At The Big Read in Clayton, MO on October 9, I took notes as four mystery authors shared their inspirations, insights, and information about their writing process.

John Lutz is the award-winning author of forty-plus novels, including two private eye series--the Nudger series, set in St. Louis, Missouri, and the Carver series, set in Florida. His novel entitled SWF Seeks Same was made into the hit movie Single White Female. Another of his novels, The Ex, was made into an HBO movie, for which he co-authored the screenplay.
In part 2, I'll tell you what Claire Applewhite had to say.
Posted by Ruth Donnelly at 12:42 PM No comments: 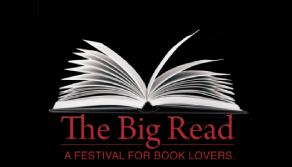 I spent most of the day at The Big Read in Clayton, Missouri. Billed as "a festival for book lovers", it's an event I attend every year. My husband works at the Municipal Library Consortium booth, but I just go to have fun! 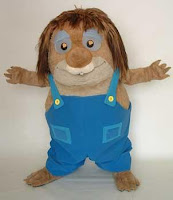 I'll write about the author talks in future posts.
Posted by Ruth Donnelly at 7:59 PM No comments: