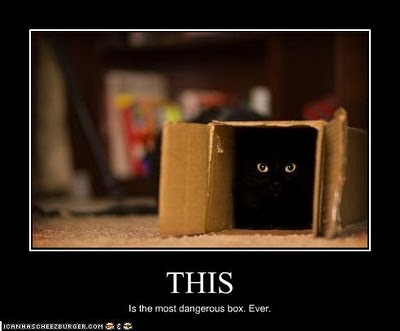 I had a wonderful time on Saturday at Agents Day (sponsored by the Missouri chapter of SCBWI)! Three awesome agents--Joan Paquette (Erin Murphy), Stephen Fraser (Jennifer De Chiaro), and Kelly Sonnack (Andrea Brown)--spoke to the group in the morning, participated in a question/answer panel before lunch, and held critique sessions in the afternoon. I learned more about what agents want (and what they don't want), got lots of good book recommendations ranging from picture books through YA, met a bunch of other writers, and got some new direction for my novel revisions. The final session of the day was an interactive reader's theatre presentation based on the picture book Rosie's Walk by Pat Hutchins. It was led by Lynn Rubright, a master educator and professional storyteller with a passion for getting kids involved with literature. I'll post more about what I learned after I've had a chance to go through my notes.
Posted by Ruth Donnelly at 7:36 PM 1 comment: 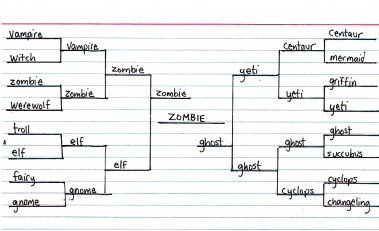 Check out this awesome March Madness bracket! I came across it in Elana Roth's post on the Caren Johnson Literary blog (originally from Indexed).
Posted by Ruth Donnelly at 7:00 PM No comments: 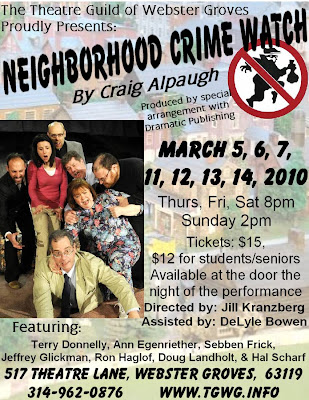 On Friday, I attended a performance of Neighborhood Crime Watch by Craig Alpaugh, presented by TGWG (Theatre Guild of Webster Groves). The play is a comedy; a hiliarious farce involving a group of quirky neighbors--Lisa, a young woman whose dog has been stolen; Mona, a brash older woman who was the victim of a purse snatching; Father Bob, the parish priest; Myron, a psychiatrist who was traumatized after witnessing a crime; and Officer Buddy, a policeman who does not want to get involved. The motley crew gathers for a neighborhood crime watch meeting, only to be joined by a pair of burglars--one a reluctant crook; the other a self-proclaimed “daredevil”--masquerading as concerned citizens. My husband plays the role of the neurotic psychiatrist. The play runs for two weekends at 517 Theatre Lane in Webster Groves. Remaining performances will be Thursday March 11, Friday March 12, and Saturday March 13 at 8 pm, and Sunday March 14 at 2 pm. Tickets are $15 (or $12 for seniors and students). Please call (314) 962-0876 for more information or to reserve tickets, or visit the TGWG website at http://www.tgwg.info/
TGWG rehearses and performs in an old house that has, at various times, served as a kindergarten and a printer’s shop. After the play, the cast and crew began talking about uncanny sights and sounds that have been observed in the theatre over the years. Apparently, the theatre is haunted by a number of ghosts--among them, a disembodied head that appears in the basement, a teenaged boy ghost who runs up and down the stairs, a little girl, and a male spirit who goes by a variety of names. Paranormal researchers who have visited the house have caught various weird manifestations on film--leering faces; strange sparks; glowing orbs that seem to chase people.
The opening night party ended at about 11:30 PM, and people began moving toward the door. I suggested hanging around for another half hour to see if any apparitions would show themselves at the witching hour. Strangely, nobody seemed to like this idea. Suddenly, the group seemed ill at ease. Glancing nervously over our shoulders, we all fled to the safety of our cars.
Posted by Ruth Donnelly at 2:05 AM No comments:

I’m looking forward to the Agents Day that will be held on March 20, 2010, at St. Charles Community College. It’s sponsored by the Missouri chapter of the SCBWI.

I’ve signed up for a critique session in the afternoon. The instructions say to bring copies of the first 500 words of my manuscript, which will be read aloud to the agent and critique group. I’m taking the beginning of my middle grade paranormal, My Bewitching Autumn.