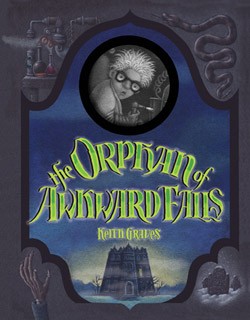 The Orphan of Awkward Falls by Keith Graves begins with a series of dark and haunting yet humorous black and white illustrations. Additional artwork within the book and at the end reminded me of The Memory Bank or The Invention of Hugo Cabret.
The text of this fast-paced, horrifying story opens with a scene in which an incarcerated cannibal named Fetid Stenchly is removed from his cell for a “treatment”. We don’t meet our heroine, twelve-year-old Josephine Cravitz, until chapter 2, when her family moves to Awkward Falls, a little town known for its sauerkraut factory and its Asylum for the Dangerously Insane. On her first night in their house, Josephine sees someone on the roof of the creepy mansion next door. Driven by her unquenchable curiosity, she goes out to investigate, only to be captured by an automaton named Norman. Josephine discovers that the only human resident of the house next door is a short, rotund, mad scientist/evil genius boy named Thaddeus Hibble, who lives a strange, isolated life with Norman and Felix, a mismatched cat. Josephine takes the terrifying capture and the weirdness of the situation in stride, and her curiosity remains intact. She spends the night watching Thaddeus conduct grisly laboratory procedures to bring a dead weasel back to life, and the two children form a tentative friendship (though Thaddeus vehemently denies it). The next day, as a fierce ice storm threatens to close down the town, Josephine learns that a serial murderer has escaped from the Asylum for the Dangerously Insane, and may be headed for the house next door. She’s got to warn Thaddeus!
This story has nonstop action, chills and thrills, and quirky characters (dead and alive; human and nonhuman), but it was the human parts--like Josephine’s compassion for the odd, unattractive orphan, and the welcome-home party Thaddeus has prepared for the parents he has never known--that kept me turning the pages. Middle graders who love dark tales of horror will enjoy this book. Some of the grisly details (murder, cannibalism, killing and eating of animals, reanimated corpses, mutant monster clones, a house burning down) might be too much for a sensitive or nightmare-prone child. I didn’t enjoy the parts that were told from the point of view of Fetid Stenchly, but they were mercifully brief, and my fondness for inquisitive, unflappable Josephine made up for it.
Oh, and I love the cover--it has a hole in the middle, through which Thaddeus peeks out, opening to reveal a creepy black and white picture of Thaddeus, Josephine and Felix.
Related Posts:
The Fingertips of Duncan Dorfman
The Romeo and Juliet Code
Okay For Now

Posted by Ruth Donnelly at 7:57 PM

The books you likened Awkward falls to are wonderful books. You said just enough to make me look this one up.

Thanks for reviewing this~ I hadn't heard of it, but now I'll have to check it out :)

I've been wondering about this one! Thanks for the review.

Hope you enjoy it, Mirka and Jess!

Kate, I wondered about it, too. I suspected I might hate it, but I was pleasantly surprised!

This one didn't quite work for me--I just couldn't sustain my belief (I have trouble, for instance, with name like "Fetid Stenchly") but I'm glad you enjoyed it!